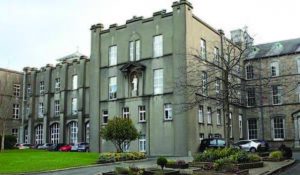 Mount Anville Girls Secondary School is a well- established school dating back to 1853 when it was set up by the Society of the Sacred Heart order. Since then, there have been a number of alterations and extensions to the original buildings.

T Bourke has had a  long standing relationship with the school and has been providing mechanical and electrical services on an ongoing basis for many years.

In 2018, Niall Bourke invited Euro Gas to advise on the most suitable options to upgrade the overall heating plant. There were two existing gas-fired cast-iron boilers that were approximately 20 years old. They provided the LTHW for the various services, including the school’s radiator heating system as well as a large 2,000 litre indirect calorifier.

Left: Overview of original layout. Right: One of the original boilers 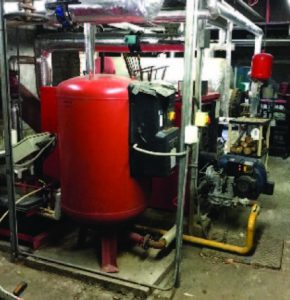 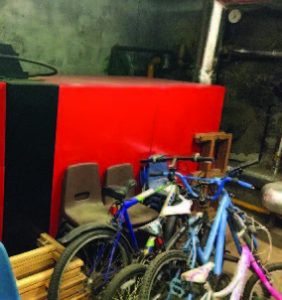 Both boilers were at the end of their life-cycle and there were also many inbuilt inefficiencies within the system, including issues with maintaining the DHW temperatures throughout the school.
It was decided to replace the boiler plant with a modular high-efficiency boiler system using the new-generation Remeha GAS220 series. So, five 300kW boilers in a back-to-back configuration, using a cascade frame kit was proposed.
The new boilers used the footprint of one of the existing boilers and this freed up sufficient space to accommodate a system separation arrangement using Cipriani stainless steel plate heat exchangers.

This was installed to separate the new boiler plant from the existing LTHW system as there is a mix of metals on the secondary side which was made up of a mixture of gun-barrel, copper and even some original cast-iron pipework.
As there were issues with providing a reliable supply of DHW using the original calorifier, it was decided to replace this with a Lochinvar gas-fired condensing type hot water heater.
The main advantages of this was the increase in the overall efficiency as the storage quantity was reduced from 2,000 litres to 400 litres, but with a recovery rate that was much higher than the original calorifier. The modulating operation of the burner also matched the exact demands from the DHW system. In addition, the stand-alone DHW heater could be used outside of normal operating hours and the DHW was no longer dependant on the LTHW system.

There were persistent issues with air and dirt in the LTHW system and, in order to protect all of the new plant, a Spirotech SpiroTrap with an integral magnet was used on the main LTHW return to capture system dirt and sludge, as well as metallic particles found in magnetite. Also, as there is a large volume of water in the system, a Spirotech S400 degasser was proposed to remove absorbed air and micro bubbles.

Following the summer shutdown of the school in July 2019 the installation proceeded. All of the existing boiler and DHW plant was removed and, due to the modular arrangement of the Remeha GAS 220 Ace boiler cascade kit, the installation of the entire boiler plant took less than three days. The cascade kit included:

Once the boilers and the Lochinvar EcoCharger were in their final positions, a common flue system was installed. As all of the plant is condensing type with very low flue gas temperatures, Dinak single-wall stainless steel was used within the plantroom, while the hot water heater was also integrated into this system. The common flue system then converted to a twin-wall stainless steel system externally. The Dinak flue components use a male/female connection with internal Viton seal and locking v-band on each joint. All components are CE certified and exceed current EN requirements.
The twin Cipriani plate heat exchangers were then installed along with the Spirotech dirt trap and degasser and the pressurisation system was also upgraded to improve the overall reliability of the LTHW system. There was also an upgrade to the BMS system and this allowed individual time control for the boiler plant and the DHW heater. 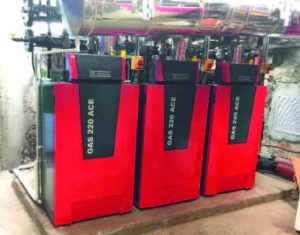 While it is only just on 12 months since the new system was installed, indications even at this early stage are of a considerable improvement in comfort levels, system performance, energy usage and carbon footprint implications.

Overview of the completed plantroom. 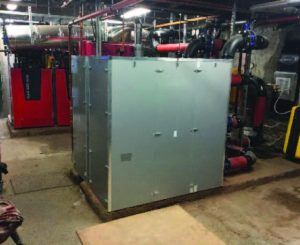